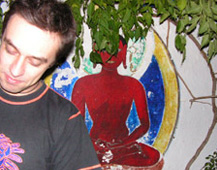 Pedro Matias aka Fluxo is one of the trance pioneers in Portugal, Dj since 1996 he has been developing his taste and interest for trance and electronic music. In 1999 with a group of friends he funded Quest4Goa that gave him the opportunity to explore trance frontiers and acknowledge from the worldwide music production, the several artists Quest4Goa had the opportunity to host, give him as well a better view of trance music. In 2006 Fluxo released his first album « Magic sence » from the project Chilled C’Quence a downbeat/ambient record made with PsyJar. Their second album « Dream Triggers » was released in 2008 on Quest4Goa records. The duo surprised the listeners with an uplifting journey with chilling and warming harmonies. Fluxo had the pleasure of playing along side artists such as: Infected Mushroom, Psysex, Cosma, Dj Jorg, Talamasca, Astrix, Hux Flux, Protoculture, Black&white, Wizzy Noise, Neuromotor, Oforia, Space Cat, Psycraft, Illumination, Dynamic, Panick, Xerox, Alien Project, Quadra just to name a few. Fluxo has been playing in Portugal on a regular basis, having his biggest highlight with the gig at the Boom Festival 2006, where he received a great feedback from the international public. His love for music and trance culture allied to his mixing technique and selection allow Fluxo to have a great interactivity with the dancefloor. At the present time Fluxo, besides Chilled C’Quence and UASCA, he is envolved ,with is partner Mirwalk (Pedro Miranda) in a new dance floor oriented live act: Photonik. First track was released on the Uk based label Transient EP « 3 Flavour » in 2009. They have been playing in several nacional and internacional parties, strongly motivated by public response to their music.

For Booking In North America: