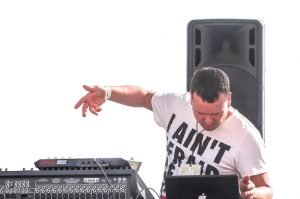 Since around the mid 90’s, Mikkel Leonhardt Rasmussen has been an very active producer of electronic music in various forms and sizes under many different music projects ever since, crafting his music to his specific tastes and passions and drawing inspiration from everything around him.
It was not, however, until he joined forces with his best friend and started The Gnome Effect, which focused on a deep and dark deep psytrance sound. The duo quickly became popular in the Danish underground psytrance scene, and the passion for music only grew even more intense from there.
Soon after Mikkel also started his solo project, which went on to become his breakthrough act – N.A.S.A. – the acronymically named project that aimed for a larger and more powerful, emotive sound rather than dancefloor heavy productions.

His work as N.A.S.A. has since flourished, in terms of both music releases, and touring around the world, performing his music. As he gradually sharpened his skills and techniques over time, the music became more and more experimental and detailed.

In 2009, he released his first trance album on IONO Music, which featured nine tracks of very different styles, which was not limited to trance music only, but also featured some of his first real ventures into chillout and ambient music.

A fan of chillout and ambient music all his life, it felt very natural when he decided to challenge himself with producing his own, still with a signature “spacy” sound, trying not to limit himself to anything and drawing inspirations and elements from everywhere in hopes of invoking a feeling of journey throughout the song and hopefully drawing up some strong emotions at the same time.

In 2014, he found his way to Iboga Records newly revived chillout department, and after a few releases on compilations, he now is ready to present his first full-length chillout album, which is coming in the first half of 2015.
Containing nine of his best chillout and ambient productions, the whole album stretches from both deep nighttime ambient sounds, to more upbeat, sunny sounds.

CAN YOU FEEL IT By NASA2015Trance,Progressiv,Psy-Trance

With NASA, Tajmahal, Asura, Cell, Mahiane, Cygna, And Many Others