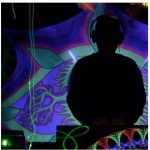 This adventure starts in the 90’s. Since the first days strongly involved with ambient music and event production, Paulo Dias aka dj high was Boom Festival ambient area “headman” from 98 until 2012.

Co-founder of the mythical Dreamlab – chill out or die!, melts in his sets a huge variety of styles and likes to be seen as a free style dj.

Alex R is my techno approach to dance music. Pushing ambient atmospheres into tech grooves and a lot influenced by my long time work as ambient dj using the name dj high. AlexR is born in 2007 to re-connect my work as dj to the techno world.
The name is a tribute to Alex Rosner, inventor of the first dj mixing desk, ‘Rosie’.
Dance music djiing and clubbing wouldn’t be the same without him and ‘her’.