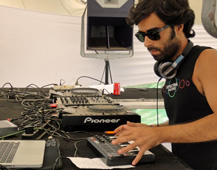 Audialize is the solo project by JoÃo Apell, born in Portugal on the 5th of july, 1981. At the age of six, with a Casio keyboard in his hands, he played along to J. M. Jarre’s .Rendez vous in Outer Space&quot; dreaming about the round flashing keyboards from the videoclip, maybe as a glimpse into what his future would hold. From then on the interest in music technology continued to increase and as soon as JoÃo found the computer and synthesizer to be the ultimate creation tool, he started to express himself through music. A few years later, as all new production tools developed, so did his urges to create something different form the mainstream electronic tunes of the time. After rumbling about a bit, he finally finds the feeling and the beat he was looking for in the PsyTrance scene. The project Suria started a while after that, in 1998, in association with Frederic Gandara. In 2000, after developing some work together, the solo project Audialize sets it´s roots on the ground. The releases came quite a short time after the first gigs and after travelling through Europe and India connecting with the psychedelic consciousness, the whole tribe was dancing to the beat. AUDIALIZE is the simple act of audio-visual perception; to imagine how something would sound like; analogous to visualize, but with sound !!!