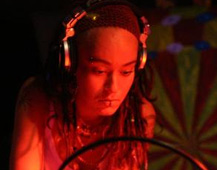 I started playing music at the age of 3, learning to play the flute over 15 years and also the sax for 7 years. Through my whole life I have always been involved in dancing, after I took my first ballet classe when I was aged 7, then at the age of 17 I went to the French National Ballet Academy, however I did not complete my studies as I realized my future lay in music rather than dance. Between the years 1994 and 1996 I helped out producing techno-events and was working as a professional dancer in several night-clubs in Holland, but then, in January 1997 I went to my first psy-trance party and that day I knew what my mission was. The next day I bought my first vinyls records and the rest is History! Not much later I joined the ELF-squad in Amsterdam, famous for the parties we held there weekly. This squad was made up of 150 motivated individuals from all over the world, dj’s, musicians, artists, clothing-designers, travelers, etc. What an experience it was! During this period my career started to take shape. I regularly DJ in several clubs in Amsterdam and in the summer of 1998 I went to Ibiza to spend the season there and played at some major out-door events. It was during those years I also developed an interest in start playing and writing downtempo and chill-out music. This led to playing my music in Germany, Spain, Amsterdam and London between November 1998 and August 1999. In November 1999 I decided to go to Los Angeles for a year. Another new adventure! I performed in Los Angeles, San Francisco and at some real amazing desert-parties, like the Burning Man. In the summer of 2000 I went back for another season on Ibiza, I could not resist the charms of the enchanted island. After the summer season I lived in Valencia / Spain for some months after which my journey continued on to beautiful Mexico. I fell in love with the country and its people and ended up staying there for 5 years. During these years got to play all over the Mexican Republic and Guatemala. My desire to produce music influenced my decsision to return to Europe, where I bought studio equipment and began creating music with more purpose. Once I had returned to Europe I continued to DJ, traveling to countries including Germany, Switzerland, Romania, Greece, Holland, Belgium, Italy and USA again. My Live-act project is now ready with a style that can best be described as progressive trance. I am also working on 2 new projects, one is called Duonamic Soul, which is a project together with my friend DJ Matte, the sound we create is full-on trance. The second is my latest project, Evelina, a musical vehicle where I explore house music combined electro and commercial trance.

For booking in N.America