Gariac’s universe is simple. Imagine Massive Attack tinkling out on the piano a few notes of Chopin’s waltz at the far end of a jazz pub while the barman replays infinitly, on an old scratched long playing record sharp King Crimson riffs while keeping in mind since the last two weeks without a break a Tajmahal heady beat. A couple of tables away, an iPod left there, on, leaks away very distinctively a Pixies refrain , a cover that Maceo Parker could have made, teleported there somehow. In the middle of a Joy division concert wearing old Pink Floyd tee-shirts cursing against the next door pub. A pub with it’s badly isolated walls from witch poors out the vocal frenzys of the official Bjork look alike forever deceived of just being the beardless reincarnation of Franck Sinatra dressed up as Ziggy Stardust on even days and in Kurt Cobain the rest of the year…. That’s it. Mainly. A cat wouldn’t find her kittens ? Gariac would ! 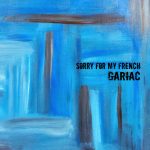