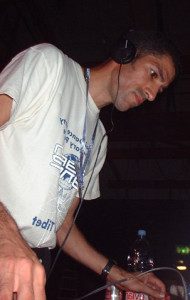 DJ Photon for psychedelic or progressive trance aka DJ On Om for chill-out/ambient sets has been dancing since 1986 and djing since 1999 and is known as Nigel Photon when it comes to writing.
I’ve been playing psychedelic trance for 15 years now since 1999.

In India with Chris Deckker, (ReturnToTheSource/Earthdance) Cosmix and others, the last set on the main stage at the incredible 1999 Solipse festival (Hungary), at the legendary Warp parties in London all in 1999 and then I became a Chichime Resident from 2001-2004. Since then, I’ve played at The Boogie Returns, my own parties Quantum Mind and Xentrix vs. Revolve, Chichime vs. Antiworld, Roots, Messmedia (Midlands), Venom, Existence Celebration, Sixth Sense and Gaia parties all in London, Sunrise festival, Tshitraka festival in Germany, Offworld festival and Waveform festival, Goa at Hilltop 2009 and Curlies, Antaris Festival Germany and Alchemy Festival UK.
I have played the last six years in Goa. At Xpirit of Chapora, Hilltop and Curlies.
In Thailand, the Blue Moon party Koh Tao, Jungle Experience and the Full Moon festival.
In Germany, Tshitraka Project festival 2008, the Indian Spirit festival and Antaris.
In Portugal, the last two Freedom Festivals.
In the UK, at Sunrise Festival and Waveform Festival.

As Nigel Photon I’ve worked on and edited various psy-trance magazines, the most recent of which is Revolve Magazine.