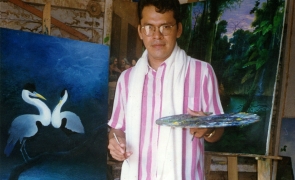 Anderson Debernardi is a resident citizen of Peru and in recent years has become one of the most prolific rainforest visionary artists in the region.

Anderson was one of founding students of the Usko-Ayar Amazonian School of Painting which was established in 1988 in the city of Pucallpa by Pablo Amaringo and Luis Eduardo Luna.

Anderson Debernardi  is a strong advocate for the preservation of the rainforest and sees the medicinal and visionary plants as a gift from nature. He hopes to see culture evolve to the point at which there forest is not merely seen as land to be “developed”, but rather as a sacred resource that must be protected.

We invit you to check his amazing work in our gallerie and support him on his website :

The Ayahuasca Visions of Anderson Debernardi